Kim’s Summer Read: The Skin We’re In – A Year of Black Resistance and Power By Desmond Cole

Written by: Kimberly A. Whaley 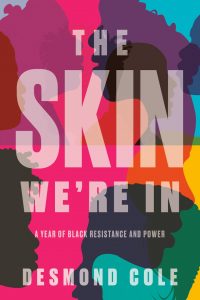 Towards the end of Black Like Me, Griffin writes, “In Black Like Me, I tried to establish one simple fact, which was to reveal the insanity of a situation where a man is judged by his skin color, by his philosophical accident-rather than by who he is in his humanity.” Griffin also importantly wrote, “All human beings face the same fundamental problems of loving and of suffering, of striving toward human aspirations for themselves and their children, of simply being and inevitably dying. These are the basic truths in all people, the common denominators of all cultures and all races and all ethnic categories. In reality, the Us-and-Them or I-and-Thou dichotomies do not exist. There is only the universal We-one human family united by the capacity to feel compassion and to demand equal justice for all.”

Black Like Me was published in 1961, by a man who dyed himself black for his purposes in discovering and revealing racial sufferings in the southern U.S.A.. The Skin We’re In, was published in 2020 identifying racial inequalities and systemic issues in Canada. Both works focus on personal experiences and insights shared based on their own encounters and observations.

Desmond Cole is a journalist who chronicles 2017 in his identification of, and struggle with, racism in Canada with reflection on past and current events both homegrown and beyond. The journey is well written. It is insightful. It is personal. For me, I can best describe it, as wounding. By that I mean, the issues raised, the subject matter addressed is more manifest than I knew, or recognized, or understood.

As a nineteen year old student in Kingston, Desmond was stopped and questioned by white police for reasons that were not apparent. This happened dozens of times. He was afraid. He writes that as a child he resented his blackness because it made him feel powerless and scared. His experiences are real. His personal rendition of police violence is echoed by news stories world-wide.

While I cannot say that I fully understand and therefore am not able to fully contemplate the meaning of his use of the term, “white supremacy” and what he describes as “this white supremacist construct called Canada, where black people cannot win…”. I can however say, that these experiences and observations on race related inequality have plagued the world for far too long.

What I would like to see is efforts and focus on the resolution. Let’s work together to develop and implement a construct of change.

Identification and acknowledgment of the problem has been consistent whether accepted by all, or not, whether acknowledged by all or not. It only takes enough people, not all people and surely to goodness we have enough people who want lasting change. We cannot change our history – we can change our future. We can take responsibility for our future. We can shape that construct. If the current construct developed from a long history of racial inequality, bias and systematic inequality, and the goal is true equality with equal access and treatment and removal of systematic bias then let’s figure it out. As a lawyer, I try every day of my career to find ways to solve problems, to develop strategies, to fix issues, remedy problems, change things for the better for individuals and families and systems……..the challenge in the fight for equality for everyone is to figure out a protocol to fix these issues and in turn to implement and carry out the plan.

Desmond Cole writes in criticism of the construct in Canada, “Canada says “look how far we’ve come” without defining who “we” is, how we’ve arrived where we are, and from where we came, and in what condition we’ve arrived. Canada is a phantom train that God sent chugging up an endless hill. We never say progress means settler colonialism, means racial capitalism – that’s obvious and so gauche to mention out loud. And we have lots of language to describe difference: multiculturalism, diversity, our cultural mosaic. My favourite word is “inclusive,” as in, “Canada is an inclusive country.” Inclusion requires the power to exclude. If Canada gives up its right to exclude, to decide who belongs here and who doesn’t, it ceases to exist. And Canada has found a way to exclude both the racialized and Indigenous peoples who were here millennia before white European settlers.”

It’s true that this terminology of diversity is used, now, more than in the past. The words, I would conclude are reflective of an attempt to recognize and acknowledge errors of the past and provide for a different course in our future. The words may be over-used, misused, and not genuinely – used. That is true. The words some say, are just words and are meaningless without action. The words that need to be acted on, are equality and equal access to justice.

I am really very fortunate to have read these books and learned from the experiences described. I am fortunate, to have accepted the opportunity to learn through others and to see through their eyes how they are affected. I don’t feel good about the read. I am left feeling powerless to remedy the situation as if it is bigger than all of us – but, that cannot be true, so I choose to turn that feeling around to empowerment. I will try my best in every situation to ensure that I support positive change.

Without reading Desmond Cole’s book, I would not have truly understood the magnitude of his suffering in the country I live in – I will say I was surprised by the extent of his suffering. I have not been exposed to the types of treatment Desmond Cole has, perhaps because I am white, or, perhaps because I am a woman, or perhaps because of any number of other extraneous contributors. I want to be a part of a positive and effective change in our future and I compel my colleagues, many of whom are privileged advocates to do the same.

Thank you for your book Desmond Cole. I hope that Desmond Cole focuses some of his obvious talents in helping us all to come up with a plan for positive systemic change that balances the pendulum in equality and humanity for every single person.

Tweet
Previous Post: POA Weekly – Week 8: What are the duties and obligations of an Attorney for Personal Care and when do they arise?
Next Post: Health and Wellness Tips During Pandemic Times and Beyond
Click here or on top Blog logo to return to Blog front page.