(SPOILER ALERT: this article contains spoilers for the movie Knives Out) 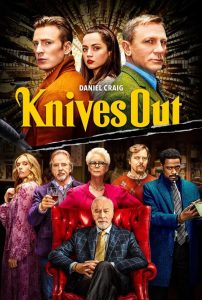 Featuring a highly dysfunctional family, a controversial estate plan, an untimely death and a contested “Death-Bed-Will”, the 2019 Hollywood blockbuster movie, “Knives Out” has all the makings of a typical estate litigation file.

So, if you’re a fan of high-drama-murder-mysteries and/or estates law, this movie is right up your alley.

The film begins with the madness of the Thrombey family descending upon Harlan’s palatial residence to celebrate the patriarch’s 85th birthday. However, the morning after, Harlan is found dead, his throat slit, and each maladjusted family member becomes a prime suspect in Harlan’s apparent murder. The film proceeds in the fashion of a witty and visually captivating ‘whodunit’ murder mystery, with plot twists at every turn.

It turns out that Harlan was not actually murdered at all, but he rather committed the act himself after his young personal nurse and confidant, Marta, apparently administered Harlan a fatal dose of morphine by mistake. When Harlan and Marta discover Marta’s apparent error, and realize that Harlan has only minutes left to live, Harlan slits his own throat to make his death seem like a suicide and to cover-up for his good friend, Marta.

Days later, in a dramatic scene, Harlan’s Last Will and Testament is read to the family by Harlan’s will-drafting solicitor, and it is revealed that he has disinherited his entire family, and left his vast estate to, you guessed it, Marta, the Nurse. Needless to say, the shocked members of the Thrombey family are not happy: they all expected to be heirs of Harlan’s Estate, but instead his wealth is passed entirely to his caretaker Marta, a stranger whom the family hardly knows.

What ensues, alongside the murder mystery aspect of the film, are hilariously frantic attempts by various members of the Thrombey family to try to contest, challenge or vary Harlan’s Will.

Initially, some family members accuse Marta of coercing or unduly influencing Harlan to make her the sole beneficiary of his Will, disinheriting the rest of the family.

Undue influence is a common ground upon which a Will can be challenged, and occurs when a vulnerable testator/will-maker is influenced or coerced by a third party, to the extent that the volition (free-will) of the testator is vitiated, thereby invalidating the Will which was not made freely or independently by the testator.

It is a common fact-pattern in estate litigation cases to see an acquaintance and/or caretaker of the deceased, such as Marta, benefitted by a deceased’s Will and accused of undue influence. This is especially true in circumstances where the testator may be elderly or vulnerable, and the alleged perpetrator wields power or control over the testator, and is able to exercise influence or coercion to cause the testator to make a will benefitting the perpetrator.

However, as Harlan’s will-drafting solicitor points out to the Thrombey family in the movie, it can be very difficult to successfully argue undue influence. There must be convincing evidence to show that the perpetrator exerted influence over the testator which was so strong that it prevented the victim from exercising free-will when drafting the impugned Will. Sometimes, this evidence dies with the deceased who after all, is the primary witness to the undue influence.

In “Knives Out”, while it is suspicious (and very unfortunate for the Thrombeys) that Harlan changed his Will late in his life in favour of his caregiver, Marta, the family concludes that there is insufficient evidence to establish that the Will was invalid due to Marta’s undue influence.

With undue influence ruled out, the family turns to a little-known principal of inheritance law in their attempts to reclaim the Thrombey Empire from Marta.

In a previous blogpost I discussed what is commonly referred to as the “Slayer Rule” or the “Forfeiture Rule”, which posits that a person who causes the death of another cannot benefit from the deceased’s death. In other words, a prospective beneficiary of an Estate will be barred from inheriting from the Estate if they caused the death.

In Knives Out, when it becomes clear to the Thrombeys that they will not succeed on challenging Harlan’s Will on the grounds of undue influence, they turn to the “Slayer Rule” for relief. The argument here is that Marta, by administering a fatal dose of morphine to Harlan, caused his death, and therefore cannot benefit from his death as the sole beneficiary of the Estate.

This seems to be a convincing argument and a way for the Thrombeys to reclaim their entitlement to Harlan’s Estate. However, in a last second plot-twist, it turns out that Marta did not actually give Harlan a fatal dose of morphine (a toxicology report reveals that she really gave him the correct medication out of a mislabeled bottle that had been tampered with by a vengeful family member), therefore she did not cause his death and the Slayer Rule could not apply and she is therefore deemed the sole rightful heir of Harlan’s estate.

The movie ends with the Thrombey Family quarrelling amongst themselves while Marta looks down on them from the balcony of Harlan’s mansion, which is now her own.

While not discussed at length in the movie, the concept of Dependants’ Support Claims is also relevant given the facts of Knives Out. Prior to his death, Harlan was financially supporting many members of the Thrombey Family in one way or another.

These individuals would appear to have legitimate claims that they were “dependants” of Harlan before he died, given that they were being supported by him financially immediately prior to his death.

From an estate litigation and planning perspective, the biggest lesson one should take from the movie, “Knives Out”, is the crucial importance of communication when it comes to an estate plan. Communication with legal counsel, family members, and, with potential beneficiaries of an estate.

Many estate-related conflicts can be avoided if a will-maker, grantor of a gift, or grantor of a power of attorney discusses the estate-planning decisions in a clear and transparent manner with loved ones and family members. By communicating an estate plan in advance, and the rationale behind same, (and even better, by documenting those discussions) testators can potentially avoid conflict and/or litigation that could otherwise ensue down the road if these matters are not addressed before the testator dies or loses capacity.

Perhaps if Harlan had explained to his family the reasoning behind his estate-planning decision, and his wish to benefit Marta upon his death, the conflict and shock which unfolded after his Last Will and Testament was revealed to the family could have been avoided.

While these morbid conversations are never easy to have, these are important conversations to have as they could allow the parties to address any problems or inequities arising from the estate plan before the testator dies or loses capacity. Holding these conversations in advance could serve to avoid even greater problems, including litigation and the associated time/cost of same, that might arise in the future.

These issues can also be avoided by revisiting your estate plan regularly, reviewing it with the benefit of legal counsel and updating it as necessary.

Tweet
Previous Post: Health and Wellness Tips During Pandemic Times and Beyond
Next Post: What Happens When a Parent Transfers Real Property to an Adult Child in Joint Tenancy?
Click here or on top Blog logo to return to Blog front page.